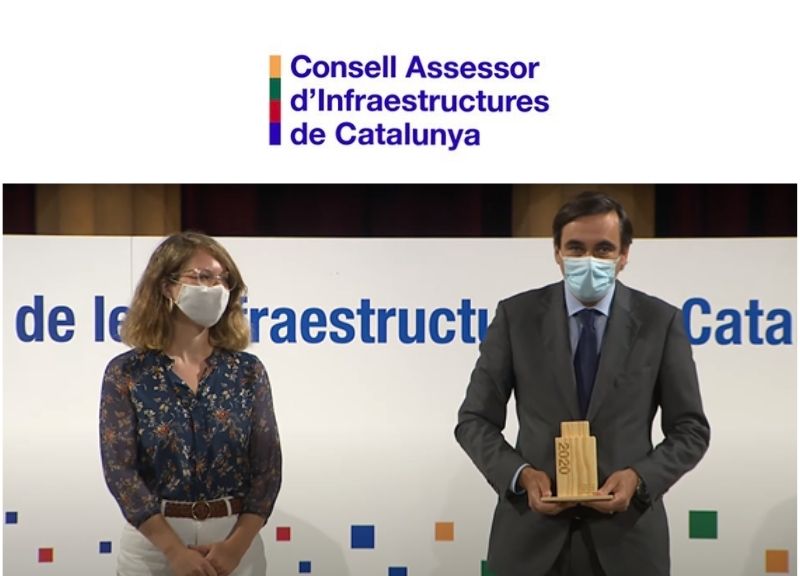 The IDP Group has been awarded the Best Infrastructure 2020 Price, granted by the Consell Assessor d’Infraestructures de Catalunya, for the drafting of the project for the new ICL Iberia salt and potash loading and transport terminal at the Port of Barcelona.

The installations include 2 hangars for potash and vacuum salt storage with a capacity of 220,000 tonnes, an office building, an outdoor storage area for de-icing salts, 2.7 kilometres of conveyor belts, an unloading terminal for trucks, a railway terminal with 4 tracks of 450 metres that allows 2 trains of 24 hopper cars to unload simultaneously and a berth with a draught of 14 metres, equipped with 2 shiploaders that allow the simultaneous loading of 70,000 tonne panamax ships and at the same time a second ship of 30,000 tonnes.

Last 15th June, Enric Blasco, CEO of the IDP Group, received the award during the celebration of the 5th Edition of the “Nit de les Infraestructures”, organised by the Consell Assessor d’Infraestructures de Catalunya in the auditorium of Foment del Treball.

The Best Infrastructure 2020 Award has recognised the different actors involved in the performance:

In this fifth edition of the Nit de les Infraestructures, and as an act prior to the awards ceremony, Mariano Marzo, Professor of the Faculty of Earth Sciences at the University of Barcelona, gave a talk entitled: “Climate change: innovating and deciding”.

We use cookies to achieve a better user experience. OkNoVer más