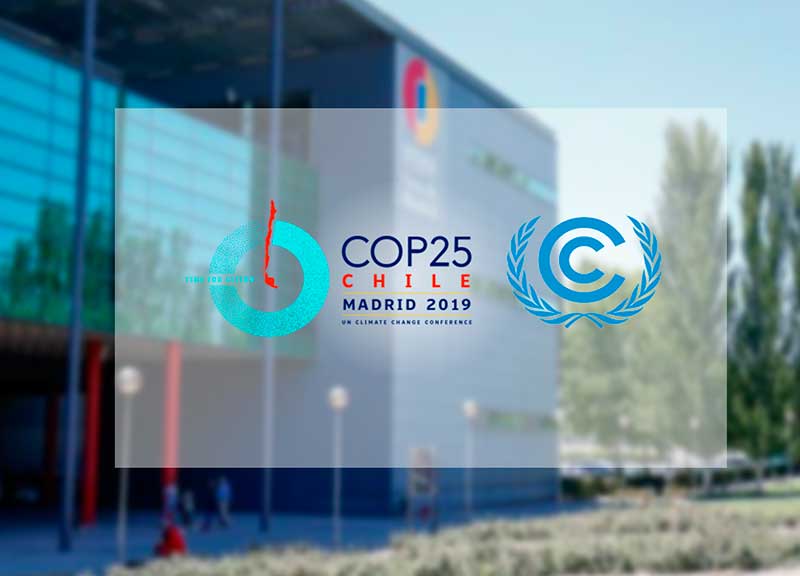 Between 2 and 13 December Madrid brings together the 196 nations and the European Union at the Conference of the Parties (COP25).  The Conference of the Parties (COP) is the decision-making body of the United Nations Framework Convention on Climate Change. This summit seeks to advance towards the implementation of agreements that establish concrete obligations to combat climate change.

This year’s summit is especially important because of the imminent implementation of the Paris Agreement on Climate Change, the first global pact in defence of climate, and is the last meeting held before being activated in 2020.

The Paris Agreement is based on the United Nations Framework Convention on Climate Change and unites all the actors involved (governments, private sector and civil society) with the common objective of urgently reducing the effects of greenhouse gases and strengthening the capacity of countries to adapt to the impacts of climate change, as well as ensuring support for developing countries.

The UN Climate Change Conference 2019 (COP25) is based on the alarming premise of an exponential growth in harmful emissions and the consequences of following the current model. It seeks to carry out actions and reach agreements involving the signatory powers to break with these dynamics, convening meetings to promote decision-making that directly affect our future as a planet and combat climate change.

Climate change represents the greatest threat to sustainable development in the world. Its effects are widespread and represent an unprecedented threat to peace, prosperity and the Sustainable Development Goals (SDS). The ODS are 17 universal principles for creating a sustainable environment that enables us to change practices to date and that foster responsibility for our planet and those who inhabit it. These objectives will only be successfully implemented if urgent action is taken to halt climate change and deal with its impacts.

The United Nations Global Compact is an international initiative implemented in 2015 by the UN, which promotes the commitment of countries, companies and the population to achieve the 17 Sustainable Development Goals and raise awareness about Agenda 2030.

The Spanish Network is the local network with the largest number of signatories to the United Nations Global Compact, is made up of 1,300 national companies and has 9,900 globally.

Since 2017, IDP has been part of the Spanish Global Compact Network with the aim of reinforcing its commitment to defending the principles it promotes. This decision entails a responsibility and an opportunity to innovate, carry out new actions to form the basis of our Corporate Social Responsibility and apply these strategies in our daily processes.